Is the triple lock sustainable?

First of all, what is the “triple lock”? The triple lock was a formula introduced in 2010 to determine annual increases in the UK state pension. Basically, it is a simple formula with the increase consisting of the higher of:

Over the same timeframe for instance the Irish state pension has increased from €230.30 per week to €248.30…. just 8% and there has been no increase in the basic rate si 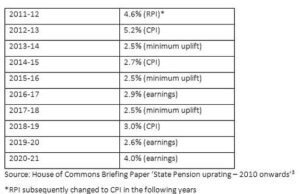 nce. True, the Irish state pension was considerably more generous than the UK version to begin with but the gap is narrowing rapidly.

It has emerged in media commentary recently in the UK that an inadvertent consequence of the Covid pandemic could prompt an 8% increase in the UK state pension next year based on the fact that Average Wage Growth will be the determining factor. This is set to increase the state pensions bill by £3bn annually. It certainly is an irony and indeed, something like the law of unintended consequences, arising because a large part of the UK labour force was furloughed for much of 2020 thereby reducing average wages for that year. Now that the UK has emerged from lockdown since April and the workforce is restored to full wages the average wage has increased in dramatic fashion.

It is an extraordinary Covid anomaly and it remains to be seen will the Conservative government preserve the triple-lock, a General Election pledge in 2019. Read more here: https://bit.ly/3zQJwQT